Its been an exciting few weeks.  I have been busy nutting out details of many of the new ideas. 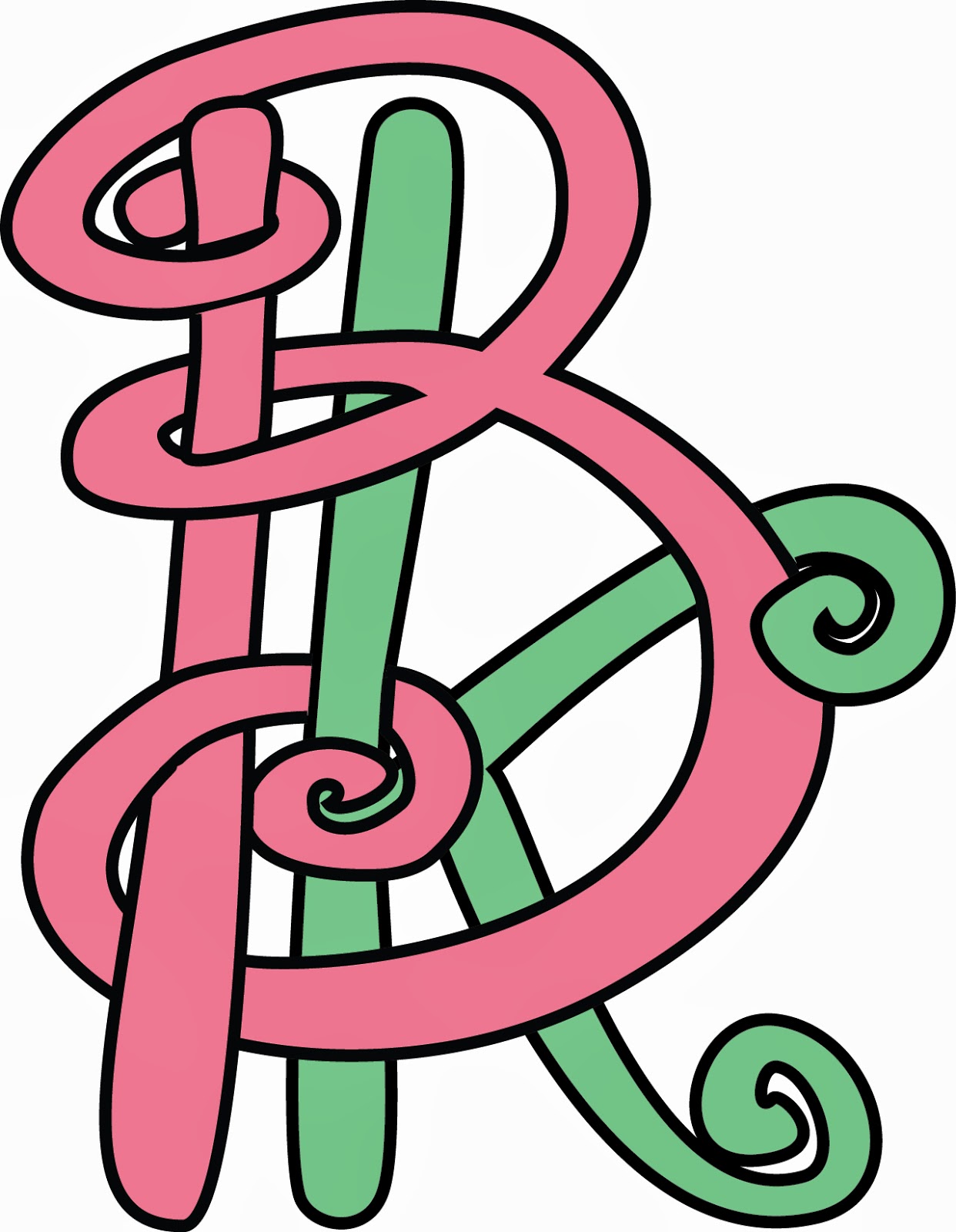 Secondly we have begun a loyalty card for clothing alterations.  We printed some colourful cards with 10 smiley faces.  We also bought a smiley stamper.  For every 10 alterations, they get one free.  The local customers are loving this concept. 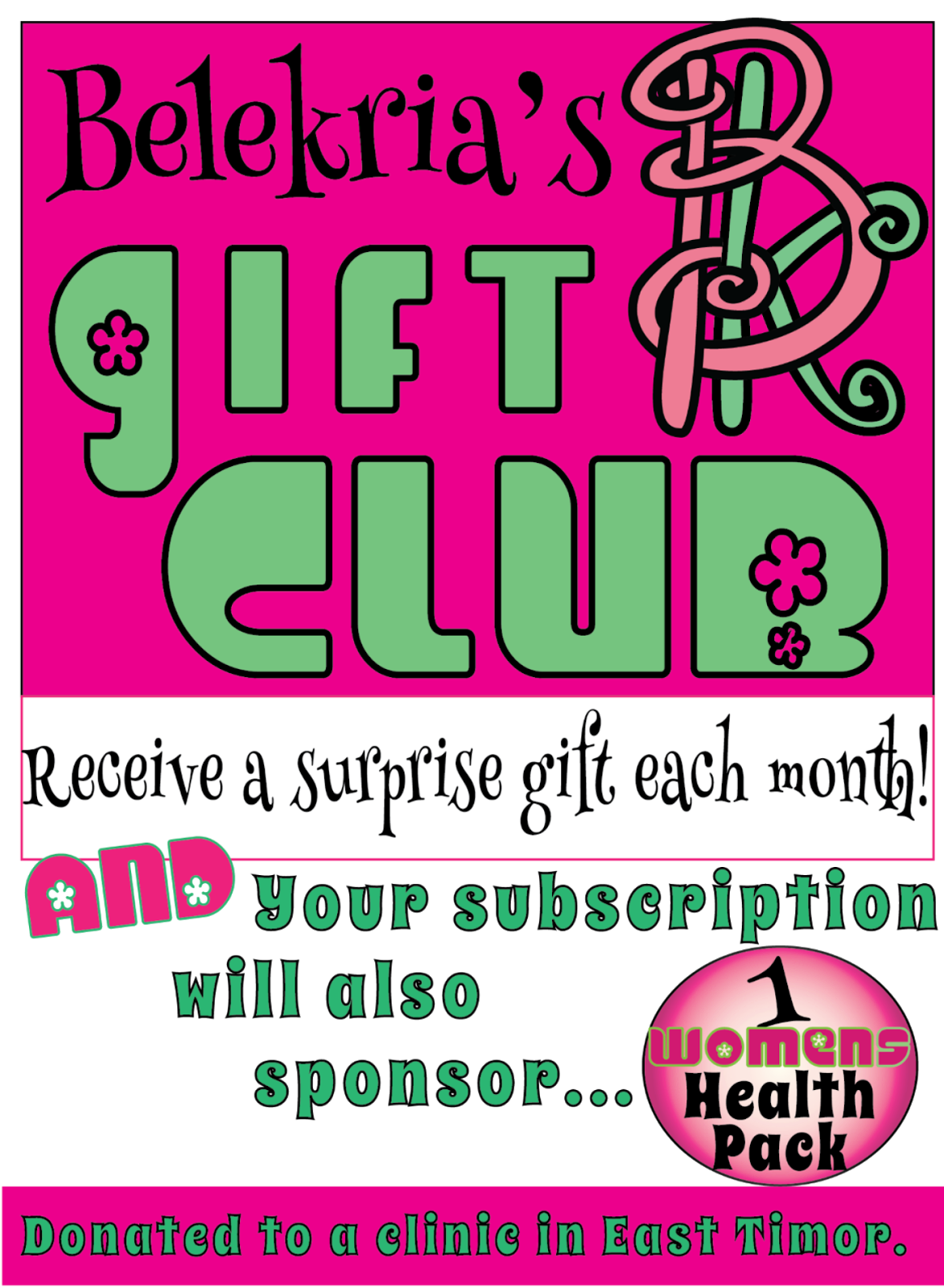 Thirdly and most exciting for me, is that we are commencing a monthly Gift Club.  This will be a subscription service, with club members receiving a surprise gift each month – home delivered! Their fee will also fund a monthly donation of 1 woman’s health pack to a clinic such as Bairo Pite.  Currently this service will only be available to residents of Dili, HOWEVER we are investigating the possibility of offering a mailed gift version to Australian Residents, so keep an eye out over the next few months for more information.
Heres a look at the brochure:
(If you would like to join, either pop into Belekria shopfront or email: belekria@hotmail.com or you can also ring me on 77265308) 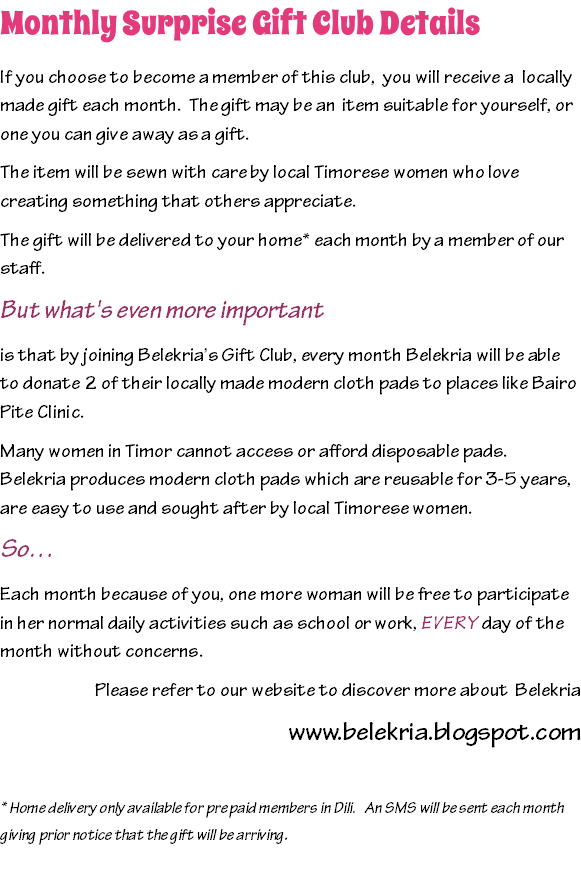 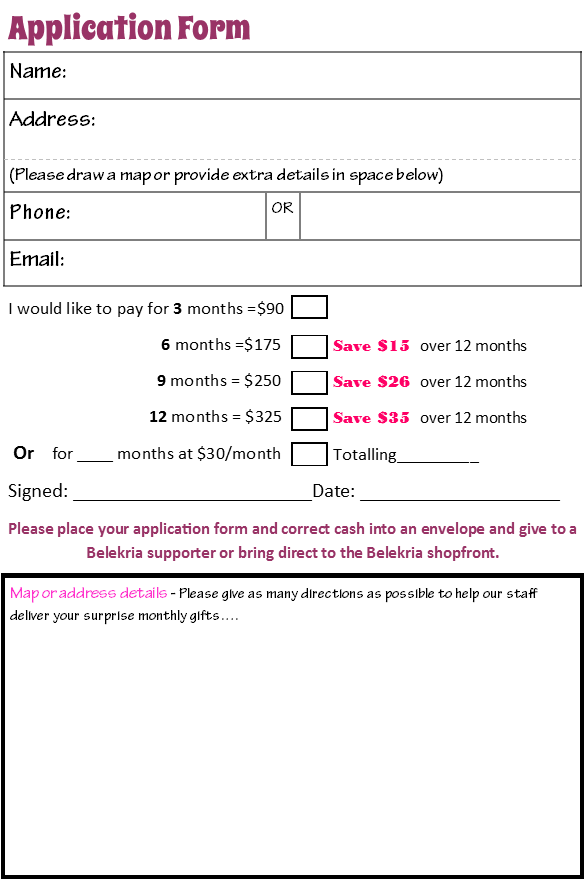 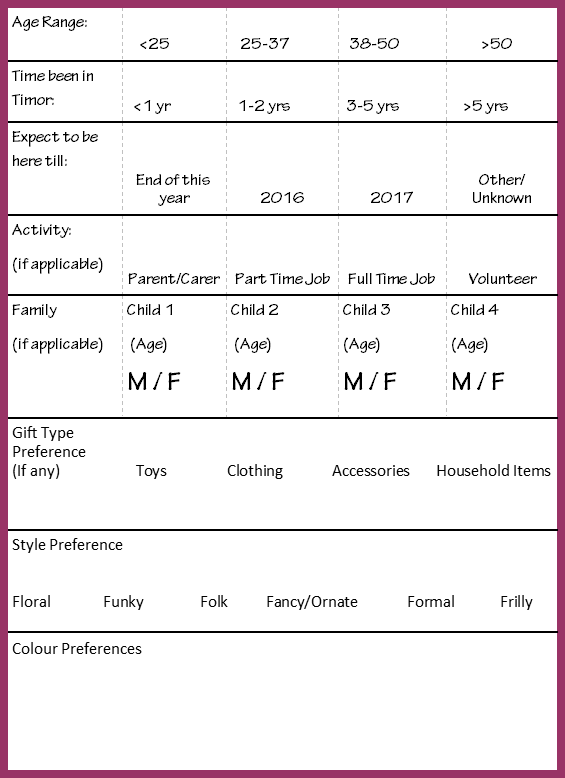 Posted by Cynthia at 6:13 AM No comments:

From iminent closure to sudden growth....hmm is that a normal business strategy?

I am back in the groove after a few months of illness and recovery :)
On returning to Dili, I was surprised and disappointed to hear that Belekria had barely opened during the six weeks I was away....Especially as they had heaps of work they could have been producing with orders from December still unfilled......
My head sewer had been struggling all year with high blood pressure issues, and then in the past few months has had family issues surface as well.  So along with some "re-entry culture shock", I fell into a pit of despair (of sorts) and began to consider closing Belekria.  But what do I do with all the orders needing to be filled?  Perhaps I could sell Belekria?
So began a series of middle of the night thought processes and all-day-on-and-off discussions with whoever could stand being around me....
I produced a small booklet for possible buyers and started putting the word out for a suitable manager/business entrepreneur (preferably a Timorese woman).
Yes, well........... it is Timor.  I guess I still forget sometimes.

SO no-one i know, knows anyone who could take the business on. ???  Its profitable, has heaps of opportunity for growth and comes with lots of support at a bargain price!! Man i think its a great business!

Then 2 days ago my remaining sewer and volunteer arrived for a chat and asked if I could keep it open for another 3 months (the rent is paid 3 months advance and is due in April) and have a go of it with Emmy as manager.   Emmy is the young woman who lives with us, and has some training in business management.
Serenity also stuck her hand up and asked if she could be a part of Belekria.
And i guess going through all the finances and having lots of new ideas for growth, well i guess it has rekindled my hope and energy.

We are yet to make any concrete decision, but it seems likely that I will offer some sort of  base salary for Emmy as manager and 3 sewers (adding the volunteer and another young woman as staff), then any profits will be distributed proportionally to them as well as to Belekria and possibly a bookkeeper.

So I will be reducing my responsibility, and hopefully setting it up gradually for me to step out completely..

Ill update again with some of the new ventures proposed....
Cheers
Cynthia