almost….
This past week was the start of school holidays.  Some young girls had been asking if they could start training during this time, so on Monday afternoon when i arrived in the sewing room, i discovered three, very young, (barely teenagers) girls taking turns pumping away on the treadles.  One is Emily, a very sweet girl who Serenity loves hanging out with.  She was a natural, and had the rhythm immediately! much to Sintas surprise (and pride – she is her niece i think!) 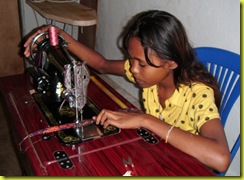 Sinta started them without the machine threaded, so that they could get used to making the treadle pump the foot in the forward direction.  Then a few afternoons later they were sewing along pen lines.  Sinta arranged it so that only 2 came at one time, as we only have 2 treadles.  I am hoping to find some tables that we can install the aussie singers to, but so far haven't been able to find any.  What with Anna and Novi on the 2 electric machines, the two girls learning on the treadles, and Sinta overseeing, teaching and using the overlocker, it is very full and busy! 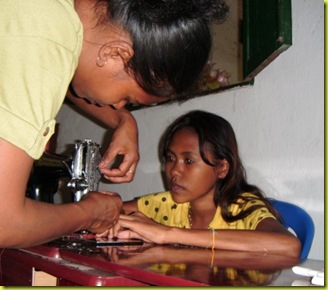 I showed some surprise at the young age of the girls and she explained that their mothers wanted to learn as well, but it was too hard for them to find time, and as their children complete schooling  with no exposure to any practical skills etc, the mums decided to take matters into their own hands and send them along to us.  So far we haven't charged them for this, and I am hoping to be able to use their new skills to assist with simple products in the future.
Posted by Cynthia at 6:21 AM

Email ThisBlogThis!Share to TwitterShare to FacebookShare to Pinterest
Labels: training