East Timor has 2 sewing shops that I am aware of.  One of them is about 4m square, the other about the size of a double garage.  Its the best one, loaded with rolls of polyesters, and crowded with customers.  The poor blokes cutting the fabric are using a bench about 50cm wide.  A liitle awkward in making an acurate cut.
At these shops i can get
Other necessities we have purchased are: 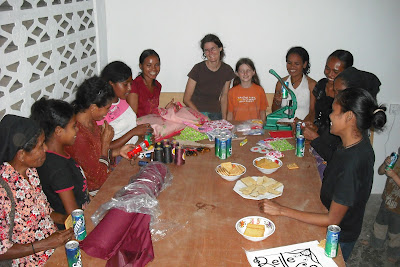 Here we are around the cutting table on our "official " launch with all the neighbouring women.

The main product i cant buy locally is the PUL waterproofing fabric. You can see a precious 10m roll on the table above.  I bought some from a great shop in Brisbane literally on the way to the airport to fly over to Timor.  I think they even  gave me a discount!  Very nice people!
green beans australia
I also lashed out and bought a great snap press machine from them which is really exciting!  It would have been a bit laborious to hammer in hundreds of snaps onto the pads!
Posted by Cynthia at 12:20 AM No comments:


Just before we returned to Timor in April this year (2010), a lovely lady gave us a donation, explaining that she raised the money by doing sewing jobs.  Samuel told her that I had a little idea for a sewing project and that we would use her money to give it a trial.  A surprise to me!...
After arriving I spoke with a long term missionary/nurse (Branca) who has worked in a small mountain village for about 7 years.  Branca was quite enthusiastic about the idea, and we decided to make some sets to trial with 6 of the more educated women in the village she works in.
Branca told me that most of the women in her village cannot read, a lot of the women don’t have underpants and some women stay at home while menstruating as they have nothing suitable to use in public.
She also re-affirmed that Education is really important.

So I went back home and began to sketch and draw, and designed my own version of a modern belted pad – to use without underpants!

Some other factors I was keen to include:
·    Adjustable – female bodies tend to fluctuate more than males.
·    Easy to sew – so women can make them themselves.
·    Simple to replicate – As above
·    Easy to replace bits – So women can repair them themselves
·    Quick to dry
·    Can be used with any scraps of absorbent type fabrics
·    Suitable for nights
·    waterproof
Amazingly I was then able to borrow a sewing machine and bought some cotton fabrics to make about 12 sets of each design. While cutting the fabric up 2 neighbouring women asked about what I was making, and after hearing about it thought it was a great idea. One of them even asked for a set straight away.

All of a sudden the idea has seemed to grow rather quickly!
Subtle words seeped out occasionally about "Cynthia's sewing project", and hesitantly I have shared my dream with a few Aussie women.  They all seem to think its a good idea!
What do you think?
Posted by Cynthia at 12:12 AM No comments:

What do they look like?
I came across a pattern for a simple waterproof  base with loops to hold  any type of absorbent fabric.  PERFECT!

I have decided to use only 2 different styles.
circle design
belted design
Both have a waterproof layer (P.U.L.- purchased in Australia), and both use a "base" with loops to hold folded "inserts" of any type of absorbent fabric.
Both designs are very quick to dry, easy to sew and simple to repair.
As soon as I can I'll stick some photos up of my prototypes!
Posted by Cynthia at 12:08 AM No comments:

Where did this crazy idea come from?

Well, being a woman, I had often in the past wondered what the poorest of poor do when it comes to their monthly cycle.  When we lived in Timor in 2008, I began to wonder how even the middle class women (if there is such a thing) could afford the disposable items.

Some issues I had to consider:
·    Modern Aussie cloth pads are expensive - ~$10 each! 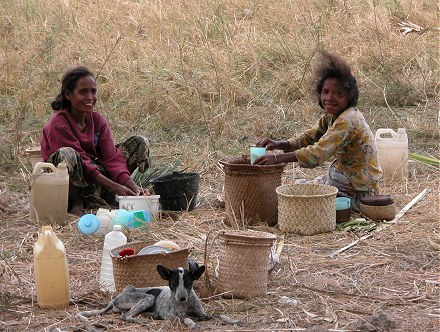 ·    Neat all-in-one types take a long time to dry, so they would need to purchase/own more of them.
·    Would the women in East Timor think it was a weird idea?
·    The women would need to know how to wash them hygienically – I must provide an instruction sheet!.
·    Would the women even have underpants to hold them in place?
Posted by Cynthia at 12:06 AM No comments:


My dream is two-fold
a.   to set up a sewing workshop locally with a few of the women in our village, to produce cloth pads as well as other items such as pillow cases which we will sell at markets etc, making a profit to provide them with an income.
b.  I also dream of supplying a variety of women in remote villages. Ideally I would like to rent out a treadle sewing machine with a payment system over a few years so that they end up owning it.
Posted by Cynthia at 12:00 AM No comments:

Email ThisBlogThis!Share to TwitterShare to FacebookShare to Pinterest
Labels: dreaming

Timorese women making modern cloth pads to sell for a profit and use themselves.

- East Timor does not have very hygienic processes for dealing with used disposable pads- (most rubbish is placed on a pile outside the house and burnt every week or two.)
- Some women have to stay home from school/work while menstruating
- Many women do not have underwear to hold disposable pads in place.
- Many women need a small income to provide basic essentials for their family such as fresh food, medicines, clothing and blankets.
Why should they spend a precious $2+ on pads that get thrown out after one use, when they could buy a re-usable alternative for a similar price that will last many years.
Posted by Cynthia at 11:59 PM No comments: