Some other pics of the sewing room... 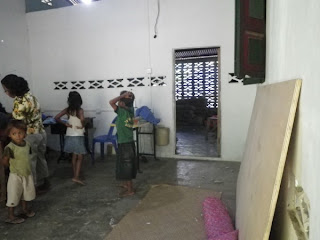 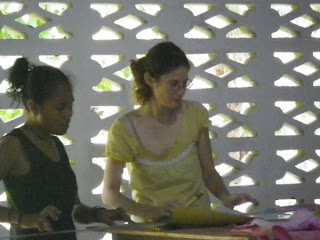 Well they may not be the best photographs, but hopefully this gives you more of an idea about our average days in the sewing room.
Posted by Cynthia at 3:18 AM No comments: 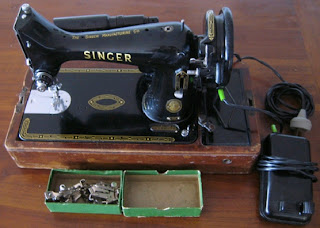 Back in Australia,  we walked to a local garage sale, and there was a beautifully kept old style singer.  not the ancient pretty decorative ones, but a solid black beauty! We spoke with the owner (who amazingly turned out to be my textile teacher from highschool, who first inspired me to get into fashion).  She assured us it was a great solid sewer, and we can easily adapt it to fit a treadle table in Timor.
I looked the label up on google and found it was from the 40's, and its model no. 201k just happens to be regarded as the best simple neat sewer available!  Apparently quilters often use them as the stitches are so regular!

Then, a man at mums church offered me an old machine. I said sure!  It turned out to be the same sinnger model!  Then an op shop where my parents help out gave me 3 machines - 2 singers and an empisal (which uses the same feet and bobbins as singer), then i recieved 2 more "old" machines, turns out they too were 1 old singer, and an empisal! So i seem to have a set.  I actually now have 7 machines all lined up, all cleaned, oiled and tested.
Just remains the difficluty of trying to get them over to Timor....Hmmmm
Posted by Cynthia at 9:56 PM No comments:

Well, things went a lot faster than i imagined!
Within a week of finding our first emplotyee - Sinta, we had locals arriving daily asking if we could alter or mend clothing.  Of course we made these jobs a priority (time wise).

More about Sinta.
We asked our neighbours if they knew anyone who could sew.  They discussed a few names then sugested Sinta.  Samuel and Serenity had seen her in action when she was hired by Anen (our neighbour) to sell his green veges at the market one evening.  Apparently she was a great saleswoman, and bravley fought off the handbag bashing buyers fighting over the veges!  She was also childless, which actually means that she has time to spare, and for me i feel better about employing her full time.
She turned out to be a lovely young woman.  She had been trained by a nun in 2004 and was a very competant sewer, although she was a little nervous seeing as she hadnt sewn since that time.  She also had no experience with patternmaking or cutting, but she is very quick to learn and often only needs to see something once before doing it herself.  (unlike me)
One example - she half watched me make up my own bias binding.  I had printed out detailed instructions and found it a bit tricky, cutting the ends and sewing them to make a diamond shape, drawing up diagonal lines, lining them up, sewing then cutting.  She was sewing at the time, but walked over and watched a couple of times.  A few days later I arrived to find her almost completing another batch - perfectly! 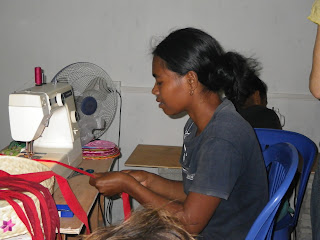 She also has fantastic sales/business skills, and really understands pricing, profit margins, and sales techniques.  I began to keep a spreadsheet for the accounts, and showed her how to fill in a daily sales record sheet which she is very acurate about.  On top of all that she is completely trustworthy, and had a myriad of opportunites to take jobs on the sly and keep the money a secret, but she continually handed over each amount as she recieved income!

WOW!  Praise God for such a great employee.

We soon realised we needed a second sewer, so word went out, and soon we had our neighbouring widow Martha's older daughter Angellica arrive.  She lives over the other side of Dili, and is pregnant with her 4th child, but her family is desperately poor, so she is willing to leave her kids with her sister-in-laws, and live back home with mum during the week, returning home for the weekend.  She had done a sewing course a few years before so she has basic sewing ability, but lacks confidence and skill. She has a lovely quiet nature, and is quite creative. 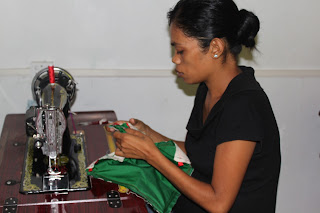 In the first month we recieved lots of requests from students, asking if we could sew shoulder bags for their school bags.  So I drew up a pattern, trialled it, adjusted it, then we cut out half a dozen bags.  They soon sold, so we bought more fabric and made another dozen.  These kept selling, so we made more! Even some foreigners heard about them and bought some for themselves (at a slightly higher price) ;)

We also began to put word out to a few NGO's about our cloth pads, and recieved an order for 100!
Then to top things off, a week before we planned to return to Australia, some librarians asked us to make some cloth books.
I helped Sinta and Angelica make the first trial one, and they made 3 others before i left.