Ok ok, so I like tongue twisters!  Popok is the word for nappy by the way.

A few days ago I answered my phone.  A woman's voice asked me (in Tetun) if I could speak English.  Of course i answered yes, speaking Tetun! Oops! After we both laughed and said hi, she asked if we made cloth nappies.  I told her yes we did, and she asked if she could come around and have a look and a chat.

Half an hour later I met Marianne, who is an Aussie and she is working at the hospital.  She works with tiny premature babies.  She is hoping that if she can introduce nappies the parents will be more inclined to nurse their little ones who need it so badly.

She had a look at our 4 sizes and after quickly finding our XS sixe declared it way too big!!! She also mentioned that our XS is designed for 2.5kg, but her little ones are often about 1kg.  Yikes! She left us with a dolls nappy and asked us to model it on that although making the crotch narrower.

Heres what they produced. 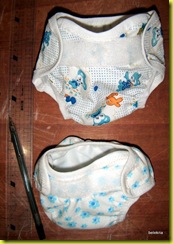 The lower one is based on the dolls nappy and the upper one slightly larger.  Yes its a lot shorter than our pen.  About 9cm high which is the length of my palm.  All of us at Bellekria were a little awed to be making something for such a small baby. 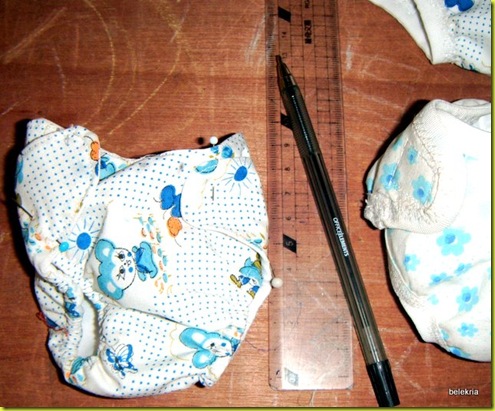 Marianne is hoping to get some funding from people in Oz to sponsor the purchase of nappy covers from us to stock at the hospital and to give out to each family.  She also wants to encourage the families themselves to purchase inserts for them.

It would be wonderful to see the hospital using nappies with all their young babies/children, and I am sure it would filter out across the country.

Posted by Cynthia at 5:17 PM No comments: