A few weeks ago, we had an afternoon visit from the village Chief (Sheffie).  He explained that he was required to arrange and purchase a wedding dress for his god-daughter in the mountains.  We asked if he could bring her down for a measure up and to choose the fabric.  We also said we would give him a good deal.
Anyway, a week later a small convey arrived – The Chief himself, an elderly woman and two younger women.  We trooped up to the sewing room in singe file, and set about establishing which of the young women was the lucky bride to be.   Funnily enough, she was absent!  But luckily, the chief had brought along his wife to measure up as she was roughly the same size.  As in, measure her, then make it “a bit” longer, cause the girl is taller, and she is “a bit” wider around the waist, and “a bit”smaller around the chest.  Hmmm so much for accurate fitting :)  We all had a giggle after they had left suggesting that if the dress didn't end up fitting the girl, maybe the older woman could wear it in her place!
Also, as the young bride to be wasn't around the other women chose the fabric for her. 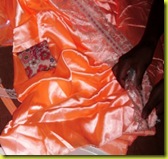 Apparently the only request was that it was a pinky colour.  Can you imagine any woman in the western world leaving that wonderful choice to others? Anyway they were quite confident.  Earlier Sinta had helped me sort through our fabric stashes for all the pinky satin finish fabrics.  She had held up a very bright apricot fabric and said this is what they will choose.  I had repressed my revulsion and suggested putting the other options out just in case.  Of course she was right.  Its all relative isn't it?
Thankfully the desig

n they wanted was very simple – no sleeves, simple gathered skirt with a fitted bodice.  Sinta kindly brought in her own wedding dress to use as a guide.  A lovely frothy green and yellow extravagance ;)
Sinta was the seamstress for this project – Our first wedding dress.
Here she is pinning and planning… 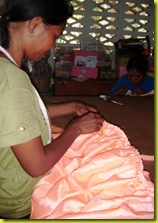 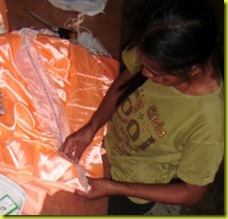 Of course she was the closest in size so she got to model it as it developed. 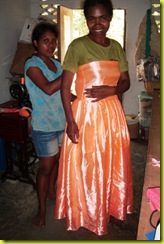 And here is the almost finished frock.  Seeing as the young bride to be still hasn't shown her face (or her body which is actually more important), we haven't stitched on the straps at the back to allow for at least a pretense of fitting. 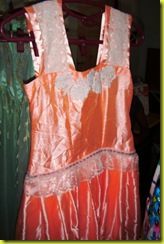 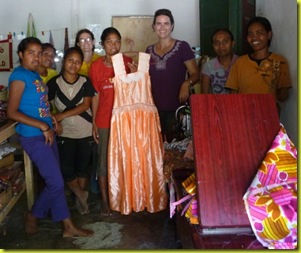