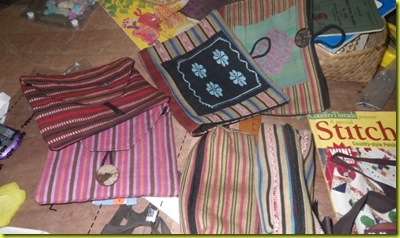 I mentioned earlier about some possible orders from a group called ETWA.  Sinta and the others stitched up some good samples.  The feedback was positive and I gave them some rough quotes for labour.  However, They have been struggling with some issues in their project and have put a hold on making new products.  Sad for them and for us!

And then I was put in touch with another group.  They raise funds to send “school bags” fitted out with stationary into 3rd world countries.  They had recently decided to start in Timor Leste.  What a great idea!  They asked for quotes on 2000, 5000 & 10,000 bags.  My spontaneous response was awesome! We can do that.  Later when I sat down and estimated the time it would take, I started to get a bit more grounded.  We would have 2-3 months, and to just source that much fabric may be difficult!  I would have to employ at least 5-6 full time women, possibly more, and seriously pump them out to make 10,000.

I wrote to the organisation with some feedback regarding fabric choices and we raced around trying to get a decent quote from a printer.   In the end I sent off a reasonable quote, and was initially contacted by the representative saying our quote was the cheapest and seemed to be the best option.  However a week later, after he returned to the committee in Australia, he regretfully informed me that they had decided to get the bags produced in a different country…. So Timor loses out and we lose work opportunity. Sniff sniff.