A few months ago Bellekria received a shipment of boxes.  These included 2-3 boxes of PUL fabric remnants and a bulk load of special “fold over elastic” – it has a crease line down the centre so it can be used like bias binding, as well as stretched to produce gathering.   I bought it because it was such a bargain and I was sure I would think of something to use it for.   Anyway here’s one of the many ways we have used it so far:  Nappy Covers! 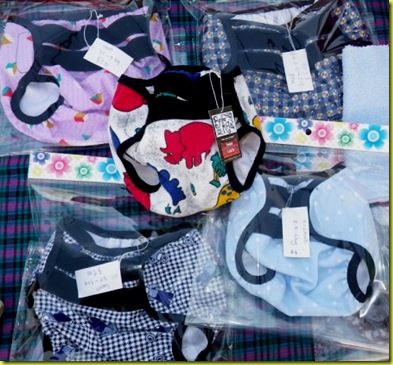 Here they are called popok’s and are used with a piece of folded cloth inside.  They don't even have safety pins, let alone fancy “nappy snaps” or even fancier modern fitted cloth nappies.  So they are really excited about this product.  We made some samples and the same afternoon a visitor popped her head in and ended up buying 2.  We took some to the market and have had a few people question if we actually made them ourselves – here in Timor.  Because they look like something imported.  In other words they look too good to be produced here in Timor! I think that is a compliment to us, but its a bit derogatory to poor little Timor Leste.  We charge the very expensive rate of $4. About an average days wage. But word is that alternatives sell for around $11 in the supermarkets.  So i guess we are providing a bargain! 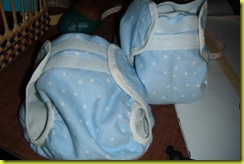 They are very simple to sew, apart from the fact that you need to stitch the elastic with a special zig zag stitch, which is only available on an electric machine, which only works when the power is on…Oh well.  We still manage to make them!
A funny note, in Australia you can buy velcro by the metre in separate sides, so that if you need more of one side eg the soft side you just buy more of that half.  Well here, it comes together.   Even when i tried to buy a whole roll of the soft side, they refused.  SO I have had to buy an equal amount of the hook side which unless i come up with some very creative ides may end up being thrown out….But I think its cheaper to buy both rolls here than to buy a roll of the soft side in OZ.
Posted by Cynthia at 6:36 PM